“Joke Rice That is Called Counterfeit” is the name of this dish. There was a long tradition of making food that looked like another dish, joke rice falls into that category. This dish has no rice in it at all. It is in fact a pasta dish. Small bits of pasta dough are dried and then boiled in broth and served with cheese on top.

The original text of this recipe is…

The translation done by Scully is as follows…

Joke Rice that is called Counterfeit. Get white flour and, for each bowlful [you will be making of the dish], a fresh egg, salt and sugar. Chop everything up together as fine as salt, then set it to dry in front of the fire. When it is dry, have good fat boullion just on the point of boiling and put it in, stirring attentively. When dishing it up, fine grated cheese on top.

Here is how I made this dish…. 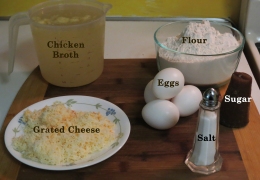 I gathered my ingredients for the dish. White flour, eggs, salt, a cone of raw sugar, grated cheese, and homemade chicken broth (with the fat).

I decided to use the raw sugar since it is the only flavoring added to the dough other than salt. I wanted to use a type of sugar that would add a bit more flavor.

The cheese I used is muenster. Muenster is a semi soft french cheese with a nice creamy flavor. It shreds well and melts evenly.

The translation of the recipe says to chop everything together as fine as salt. I chose to combine the ingredients into a dough before chopping it into small pieces. I put the flour on the cutting board and made a mound with a well in the center. Into the well I broke the eggs and added the salt and sugar. I forgot to take a picture of adding the salt and sugar to the well. So just imagine those pictures are here too. I then used a fork to start combining the eggs and flour. Once this was a thick batter I used my hands to finish combining the flour and eggs, and kneaded the dough for a few minutes until it was elastic.

Eggs added to the well.

Combining the eggs and flour.

Once I had the dough ready I decided to make two batches of the pasta. The first one I chopped the dough into tiny bits as the recipe described. The second I rolled into long snakes and cut small bits off. This second method made a pasta that resembled orzo pasta. My reasoning for this was that as I was thinking about the type of dish it is, being a “counterfeit” dish, these type of dishes were meant to impress or surprize the person eating it. I think with a dish like that, that you would have tried to make it look as much like the type of food you are pretending to make as you can. Rolling and slicing made “grains” of pasta about the size of a pinky fingernail. To me this looks much more like the dishes title describes.

I am including pictures of both methods and you can decide for yourself which you think would have been done and which best resembles the rice described in the title.

So here is the first method…
I sliced chunks of the dough ball off and chopped it to small bits. I spread out the bits on a sheet pan and placed it into a 200 degree oven. I let it bake slowly and kept an eye on it so it dried and didn’t brown.  The pasta was then cooked in broth kept just at a boil.

Chopping the pasta into small bits.

Chopped pasta after drying in the oven.

And the second method…
I cut off pieces of the pasta dough and rolled it into long thin “snakes”. Then I sliced the rolled pasta into small bits that resembled grains of rice. This was then spread out on a sheet pan and baked in the 200 degree oven to dry. Once it was dried the grains of pasta were cooked in broth like the pasta in the first method.

Grains of pasta after being dried in the oven.

grains of pasta boiling in broth.

Once cooked both types of pasta were removed from the broth and had cheese added to the top before serving. The first two pictures below are of the chopped pasta and the second two are of the cut grains of pasta.

Adding cheese to the chopped pasta.

Grains of pasta after cooking.

Adding cheese to grains of pasta.

Here are the two types of pasta side by side for comparison. Chopped on the left and cut grains of the right.
(If you click on the picture it will open larger in a new window.)

I really enjoyed making this dish. I love the idea of “counterfeit” foods. It was a good tasting dish that was a bit salty and slightly sweet. The cheese was a welcome texture and taste. The flavor of the broth it was cooked in kept it from being a boring pile of pasta. I will be making this dish again and my one change would be the egg to flour ratio. The dough was a bit stiff and could have used a bit more egg or a bit less flour.