Posted on September 19, 2014 by Murienne l'aloiere

I did these two sauces together as they differ by only one ingredient… garlic. Both are sweet, sour, and thick. Both give a nice mild spice that would be lovely on roasted pork or poultry.

Here are the original recipes…

The translations are al follows…

Cameline Garlic Sauce is similarly made, but needs garlic buds cutting through the vinegar.

Here is how I made the sauces…

Ingredients for the two sauces.

I chose a sweet white wine for the sauces to keep the acid from overpowering the other tastes. White wine vinegar was used to compliment the chosen wine and because red wine vinegar would have darkened the color of the sauces.

Because the two sauces are the same except for the addition of garlic to the second I followed the recipe for making the cameline sauce and then split it in two and added the garlic to half of the sauce.

I crumbled the toasted bread and left it to soak in the wine, vinegar and verjuice. Once it was well soaked and soft I pressed it through a sieve. To the bread and liquid I added the ground ginger, cinnamon, cloves and grains of paradise. This made the Cameline sauce.
I split it into two bowls and added finely chopped garlic to one of the bowls. 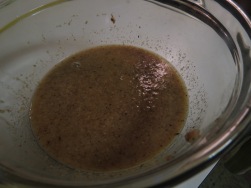 Dark toasted bread, soaked with wine, verjuice and vinegar and passed through a sieve.

Adding the spices that are used in both sauces. 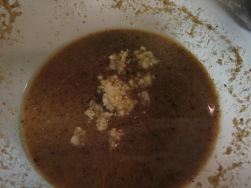 Adding the garlic to the second sauce.

I left each sauce in it’s bowl for about half an hour to let the flavors blend together. I stirred each sauce every five minutes to make sure the spices and garlic were well distributed while the sauces rested.